Northern Kentucky University will honor more than 1,900 students at its 50th kick-off exercises today, May 6 (Salmon P. Chase College of Law) and Saturday, May 7 (all other colleges).

The three ceremonies to be held at Truist Arena (formerly named BB&T Arena) will recognize students who have completed graduation requirements at the College of Education, College of Arts & Sciences, and College of Informatics at 9:00 a.m. while students from Haile College of Business and the College of Health and Human Services will be recognized at 2 p.m. on Saturday, May 7.

Chase College of Law will hold its grand opening today, May 6, at 6 p.m.

Under the mentorship of Dr. Amber Onorato, she authored an original research proposal describing the synthesis and analysis of potential small molecule inhibitors of an enzyme in the inflammatory pathway and was awarded the Dorothy Westerman Hermann Fellowship. She was co-recipient of the 2021 Albert and Louise Cooper Memorial Scholarship for her outstanding progress and motivation in undergraduate research. In the fall, Bezold will begin his doctoral studies in organic chemistry at Emory University. 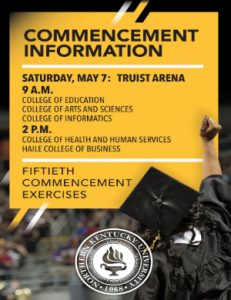 At the Chase College of Law launch exercises, Judge John Nalbandian of the United States Court of Appeals for the Sixth Circuit will deliver the commencement address and receive an honorary Doctor of Laws degree.

Justice Nalbandian, who has served on the Cincinnati court since 2018, is a lawyer-in-residence at Chase, teaching a spring seminar on the Supreme Court of the United States.

Prior to his appointment to the Court of Appeals, Judge Nalbandian was a partner at the Cincinnati law firm Taft, Stettinius & Hollister, where he served as senior appellate counsel and practiced complex litigation. He was also a member of the board of directors of the State Justice Institute, established by the federal government to improve the administration of justice in state courts. He is a graduate of the Wharton School at the University of Pennsylvania and
the University of Virginia School of Law.

In addition to Justice Nalbandian’s commencement address, the ceremony will include remarks from Kentucky Supreme Court Justice Michelle M. Keller, a Chase graduate, on behalf of the court.

Four subjects that should be taught in law school